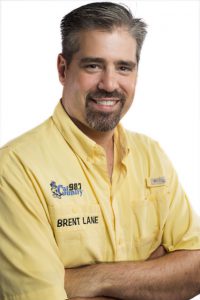 Brent Lane, radio personality at Cat Country 98.7, was named this year’s Community Leader of the Year.  Since moving to Pensacola in 2005, Lane has made a positive impact on the Pensacola community by dedicating his time, energy, and talents to this community and its citizens. He supports over twelve non-profit organizations throughout the community and touches the lives of thousands of people each year through his volunteer efforts.  Along with presenting a top-rated morning radio show, he has dedicated himself to Manna, where he has served on the board of directors for the past 11 years, including serving as Board President as well as chairing several committees.

Brent Lane has been on air in Pensacola on the Cat Pak Morning Show since 2005. Believing in success through service,  Brent works to serve Pensacola.  He has served as the Master of Ceremonies for the King and Queen of Spain.  He leads thousands of people in the Annual Making Strides against Breast Cancer Walk.  More than just the voice, Brent is actively involved in event planning and execution for these events.  He has also actively worked to attract visitors to the Pensacola area through Visit Pensacola and Visit Florida.  The host of more than 30 Tourism Videos, Brent is a recognizable face of Pensacola locally and nationally. Locally Brent has a soft spot for helping people better themselves. He served as the 2011 President of Manna Food Pantries Board of Directors and is currently in his 3rd term on the Board (11 Years).  He is a graduate of Leadership Pensacola (class of 2009) and enjoys helping new LeaP Class members.

Brent and his wife Angela have 3 children… All of whom have worked at the radio station in some capacity.  Both Brent and Angela mentor others as Coordinators for the Dave Ramsey Financial Peace University Course.  Angela is a member of Impact 100 (the largest women’s IMPACT philanthropic group in world) and works as the Team Captain for Making Strides and the American Cancer Society.

When not on the radio, Brent loves “Huntin, Fishin, and Lovin Everyday” on the Gulf Coast.  Brent can be heard every morning on the Cat Pak Morning Show